2019 Series - The Life and Legacy of Lama Tsongkhapa 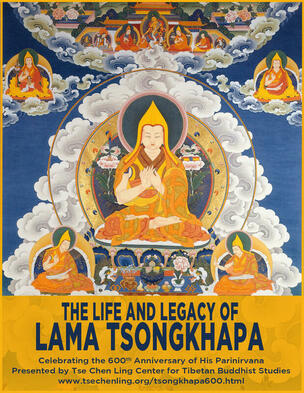 Tse Chen Ling invites you to join us for the programs in this yearlong celebration of the life and lineage of Lama Tsongkhapa!

The year 2019 will mark the 600th anniversary of Lama Tsongkhapa's parinirvana. Therefore, from fall 2018 and through 2019, Tse Chen Ling will be offering a selection of specific programs that celebrate the life and lineage of Lama Tsongkhapa. These programs will reflect the core teachings and unique features of the Gelug tradition established by this precious master.

Tse Chen Ling is honored to have an array of eminent lineage lamas, published scholars and respected teachers who will be sharing the wisdom and guidance of Lama Tsongkhapa’s tradition with us.  These teachers include, Gyumed Khensur Rinpoche Lobsang Jampa, Yangsi Rinpoche, Robert Thurman, Thupten Jinpa, Ven. Robina Courtin, Gareth Sparham and Emily Hsu.  Additional teachers and programs may be added throughout the year.

2019 Events
About Lama Tsongkhapa and "International Year of Tsongkhapa"

​Je Tsongkhapa Lobsang Drakpa (1357-1419) was one of the greatest scholar-practitioners in the history of Tibetan Buddhism and the founder of the Gelug tradition. While still a young man, Tsongkhapa distinguished himself through intense study, a sharp intellect and meditative accomplishment. In the last three decades of his life, Tsongkhapa dedicated himself to practice, teaching, writing and establishing monasteries. Respected by all four schools of Tibetan Buddhism, Lama Tsongkhapa’s deeds contributed tremendously to the revitalization of Buddhism in Tibet.

On December 30th, 2018, the 104th Ganden Tripa Lobsang Tenzin, the supreme head of the Gelug lineage of Tibetan Buddhism proclaimed that 2019 will be “International Year of Tsongkhapa.” Ganden Tri Rinpoche wrote, “I call upon all Gelukpas and well-wishers to render their support to spreading awareness of the eloquent teachings and writings of the great Master Tsongkhapa throughout the world.  I encourage Geluk monasteries, centers, organizers, individuals and admirers of Master Tsongkhapa worldwide to initiate special activities throughout the year of 2019 to commemorate (the) 600th anniversary of the great master and to inspire beings to follow in his footsteps.”

The Foundation for the Preservation of Mahayana Tradition (FPMT) is an organization devoted to preserving and spreading the unmistaken teachings of the Buddha based on the tradition of Lama Tsongkhapa of Tibet. As an FPMT center, Tse Chen Ling is committed to sharing this tradition.
Spread the Dharma - Sponsor the Series

​Organizing this very special series of programs requires a large amount of resources. Tse Chen Ling is honored to be able to present a year-long series of teachings to commemorate our lineage and we are committed to meeting the needs of presenting it. We could use your help!

Please consider sponsoring this unprecedented series and help to bring these teachers and precious teachings to Tse Chen Ling. 100% of the proceeds will go to the programs in this series.

The greatest gift we can offer is the gift of the Dharma; it provides benefits not only for this life, also for future lives up until enlightenment.