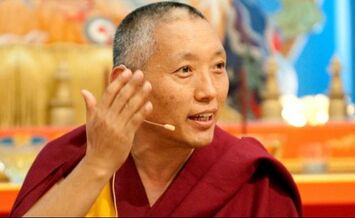 The Four Close Placements of Mindfulness
Sera Mey Khen Rinpoche Geshe Tashi Tsering
​
Friday June 5, and Sunday, June 7, 2020
All classes will be held from 7pm-9:00pm PDT
This course will be presented via Facebook livestream
​
Tse Chen Ling is truly honored to have Khen Rinpoche Geshe Tashi Tsering, abbot of Sera Mey Monastic University and creator of The Foundation of Buddhist Thought, teach virtually at Tse Chen Ling.
Khen Rinpoche has kindly accepted our request to teach us from his seat at Sera Mey in south India on the topic “The Four Close Placements of Mindfulness.” The Four Close Placements of Mindfulness (dran-pa nyer-bzhag, Skt. smrtyupasthana, Pali: satipatthana)” are the first four of the 37 factors leading to enlightenment (byang-chub yan-lag so-bdun).

Mindfulness of these four helps us overcome grasping an independent self-sufficient “I.” Khen Rinpoche will guide us through explanations of these four and how to apply them in our lives.
Khen Rinpoche has said that those attending the classes can prepare by reading the following books:
"Stages of Meditation" by The Dalai Lama
https://www.shambhala.com/snowlion_articles/stages-of-meditation/
"Mindfulness in Plain English" by Bhante Henepola Gunaratana
https://wisdomexperience.org/product/mindfulness-plain-english/


About
Sera Mey Khen Rinpoche Geshe Tashi Tsering was born in born in Purang, West Tibet in 1958. At an early age he fled over the Himalayas with his parents and younger brother to escape the occupation of his country by the Chinese government and its state sponsored destruction of Tibet’s unique culture. He received his early education in schools run by exile Tibetan Government in India. In 1970, Geshe Tashi was among the first to become a monk at the newly established in exile Sera Mey college of Sera monastic university. Together with his fellow monks, under extremely hard physical conditions, he helped re-build this famous monastery and college.

Geshe Tashi graduated with the highest honors becoming a Geshe Lharampa in 1990. He went on to study at Gyuto Tantric monastery from 1990. Geshe Tashi has been teaching in the West since 1991, first at Nalanda monastery in France, then from 1994 to 2018 at Jamyang Buddhist Centre London. He has also been the main teacher at Jamyang Buddhist Centre Leeds and Jamyang Bath. He has traveled to many other European countries, USA and Asia, to lead Buddhist courses, conferences, and interfaith dialogues.

Geshe Tashi has created The Foundation of Buddhist Thought campus course and on-line course. He is the author of a six-volume series by the same name, published by Wisdom Publications.

Khen Rinpoche is known for his understanding of the western mindset and for his ability to present the most complex Buddhist teachings with clarity, authenticity and sophistication. In May 2018, Geshe Tashi Tsering was appointed the 91st abbot of Sera Mey Monastic University by His Holiness the Fourteenth Dalai Lama of Tibet.

Aware that Geshe Tashi Tsering has many students around the world, Tse Chen Ling is dedicated to offering this program for free on Facebook to open it up to as many students and listeners and possible.  If you are able, please consider sponsoring Tse Chen Ling Center for Tibetan Buddhist Studies to continue to help the Dharma flourish throughout the world.