Atiśa Dīpaṃkara: Illuminator of the Awakened Mind
with Prof. James B. Apple 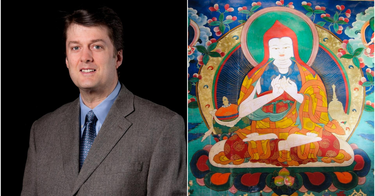 Few figures in the history of Buddhism in Tibet have had as far-reaching and profound an influence as the Indian scholar and adept Atiśa Dīpaṃkara (982–1054). Atiśa is best known for introducing many of the core Mahāyāna teachings that are widely practiced throughout the Tibetan Buddhist world, including the Stages of the Path to Awakening and Mind Training (lojong), as well as having contributed to highly influential commentaries on Madhyamaka that synthesize various schools of thought. In addition, Atiśa was an influential practitioner of Tantra.

James B. Apple, a widely published author and professor at the University of Calgary, is a leading expert on Atiśa’s life and teachings. Drawing upon his landmark book by the same name, James Apple will touch upon the full range of Atiśa’s contribution to Buddhism.

“…Atiśa has always been dear to the hearts of Tibetans, and by bringing his words and deeds to life, Apple shows us precisely why this is so—and why we ourselves should look to Atiśa for guidance.” —Roger R. Jackson, Professor Emeritus of Asian Studies and Religion, Carleton College

About James B. Apple:
James B. Apple is Professor of Buddhist Studies at the University of Calgary. His research focuses on the critical analysis of the Mahāyāna sūtras and topics within Indian and Tibetan Buddhism. His books include Jewels of the Middle Way: The Madhyamaka Legacy of Atiśa and His Early Tibetan Followers, A Stairway taken by the Lucid: Tsong kha pa's Study of Noble Beings, and Stairway to Nirvāṇa.
About the event:
This event will be presented simultaneously via Facebook LIVE on Tse Chen Ling’s Facebook page and via Zoom to a limited number of Tse Chen Ling ordained sangha and community members. Tse Chen Ling is dedicated to offering this program for free on Facebook to open it up to as many students and listeners as possible.  If you are able, please consider sponsoring Tse Chen Ling Center for Tibetan Buddhist Studies to continue to help the Dharma flourish throughout the world.