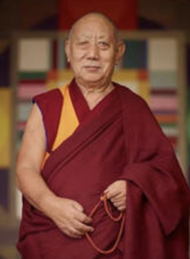 ​His Eminence Jetsun Lobsang Delek, the 74th abbot of Sera Jey Monastery, was born in 1939 at Karze district in Tibet. At the age of seven, he joined Karze Monastery and started memorizing traditional monastic scriptures. His given name is Lobsang Delek and received ordained name as Ngawang Soepa while he was newly ordained at age of seventeen. In 1959, he fled to India and continued his Buddhist philosophical studies at Buxar in north India. In 1968, he received the full-ordained vows from His Holiness the Dalai Lama. In 1982, he was honored with first position of Lharam Geshe degree. Moreover, in 2005, he was enthroned as the abbot of Gudme Tantric Monastery, and he became the 75th Sera Jey Abbot on 6 May 2012. Generally, he devotes his precious regular time in giving teaching and conferring different initiations and oral transmissions.​His Holiness the Dalai Lama has given Khensur Rinpoche many leadership roles in the past two decades:
​
Tse Chen Ling is honored to welcome Khensur Rinpoche Lobsang Delek for this special teaching.
​Program Description:

The Eight Verses of Thought Transformation is one of the most important texts from a genre of Tibetan spiritual writings known as lojong (mind training).

​This root text was written by the eleventh-century meditator Langri Thangpa Dorje Sengge. His Holiness the Dalai Lama refers to this work as one of the main sources of his own inspiration and includes it in his daily meditations.

​Registration:
Please register in advance if possible. If attending online, once you register, you’ll receive the Zoom link to join the class. If attending in-person you will receive a confirmation of your registration. Alternatively, you may register via email at office@tsechenling.org.

Ordained sangha are always welcome free of charge. ​No one is ever turned away for lack of funds but registration is strongly recommended so that we can accommodate everyone comfortably, both in-person and on Zoom. Thank you!
​
Register here