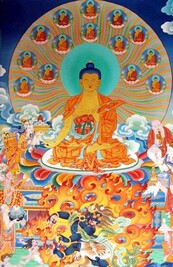 ​
Chotrul Duchen, the fifteenth day of the Tibetan New Year, commemorates the time when Shakyamuni Buddha showed miraculous powers in order to subdue the non-Buddhist teachers (Tirthikas) who doubted the teachings, and to inspire more faith in his followers. The merit of virtuous actions performed on this day is multiplied by 100 million, as cited by Lama Zopa Rinpoche from the vinaya text Treasure of Quotations and Logic.

During the period from Losar through Chotrul Duchen, FPMT students are advised to recite the Mani and White Tara mantras for the health of His Holiness the Dalai Lama and Lama Zopa Rinpoche and the fulfillment of all their wishes, and for the benefit of all in the FPMT organization.