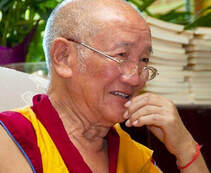 ​I bow to the one who, with no beginning, middle or end, has a serene stillness and is clear-minded and fully evolved, who became clear from his own aspects and once clear, shows fearless, constant paths of the mind to bring realization to those with no realization... ~  Maitreya
​

One of the major texts studied in all traditions of Tibetan Buddhism, Maitreya’s Sublime Continuum of the Mahayana clarifies the meaning of our buddha potential, the tathagata essence, in particular the emptiness of the mind that allows evolution to a state of complete enlightenment.

This is not a beginner level course.
About the Teacher:
Venerable Emeritus Abbot Khensur Rinpoche Lobsang Jampa (known as Geshe Trinley Topgye) was born in 1937 in Nyaktren, a sector of Lhasa, the capital of Tibet. In 1947 at the age of 10, he gained admission to Sera Mey Monastery of the Sera Mahayana Monastic University near Lhasa – one of the three major seats of highest Buddhist studies.

Rinpoche soon returned to his studies in the exiled Sera monastery, reconstructed under the guidance of His Holiness the Dalai Lama, the spiritual and political head of the Tibetan people. From 1959-70, he resided with more than 1500 monks from four Tibetan Buddhist sects at Buxar, an old British Army camp in West Bengal. In 1970, the monks of Sera Mey relocated to Mysore district in Karnataka State in southern India.

The monks reestablished Sera Mey Monastic University in Bylakuppe. Khensur Rinpoche continued his spiritual training and studies there with his characteristic dedication and enthusiasm. In 1986, he completed the final exam for a Geshe degree, and received the esteemed honor of Geshe Lharampa (equivalent to a Ph.D.), the highest level awarded.

From 1980 to the present, Khensur Rinpoche has continued to teach at Sera Mey Monastic University. In 1989, he assumed the position of Discipline Master for one year. Then in 1990, he received the advanced degree of Ngagrampa (highest degree in Buddhist Tantra studies) from Gyumed Tantric College after extensively studying the secret teachings of the Mahayana tradition.

During his term as Abbot of Gyumed, Khensur Rinpoche made his first visit to the USA and Canada to conduct various religious teachings and rituals at the request of the Gyumed College administrators and Western students. A considerable number of Westerners benefited from this initial tour. In 2003, he taught widely in Singapore and Malaysia.

Khensur Rinpoche is both a scholar of great knowledge and understanding, and a holder of many traditional teaching lineages. His generous presence and contributions to the Sera Mey Monastic University have proven indispensable. A living example of Buddha's teachings, he divides his time between personal meditation and practices, and teaching a growing network of Western and Tibetan students. He is highly qualified to teach on all levels of Buddhist practice and to conduct all Buddhist rituals.
Registration for Khensur Rinpoche Tathagata Essence class
Advanced registration for this program is required. The Zoom link will be included on your registration ticket/receipt.

​No one will be turned away for lack of funds. Please contact us at office@tsechenling.org to inquire.
​
Register here