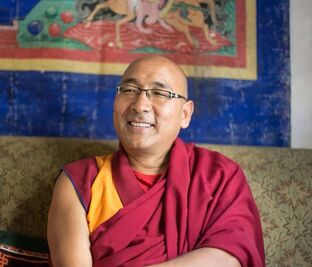 Wednesday, February 26: 7pm-9pm
​
Although death is inevitable, we usually avoid thinking about it and often lead our lives as though it will never happen. The Tibetan Buddhist tradition is rich in teachings on the subject of death that provide a unique perspective on the importance of accepting death as a part of life. In this course, Geshe Thubten Sherab will share his heart advice on how to properly prepare for your own death – as well as assist others in our lives upon their death – so that whenever it does arrive, death can be experienced with peace of mind, knowing that we have truly lived our lives meaningfully and joyfully.
Geshe Thubten Sherab was born in Manang, Nepal in 1967 as second of 5 sons. He attended Kopan monastery at the age of 9 in around 1976/1977 and was ordained by Kyabje Lama Zopa Rinpoche.​ After 10 years of study in Kopan, he went to Sera Je Monastery for further studies in 1987, and graduated as Geshe at the end of 1999. After that he joined Gyume Tantric College for a year. Then he taught young monks at Kopan for a year.​​​

In 2001 he was sent by Lama Zopa Rinpoche to New Mexico to serve and help at International Office of FPMT as well as teach at TNL in Santa Fe and Ksiti Garba Center in Taos as resident teacher. He also served as Board member of FPMT for 2 years during that period.​ By end of 2003 in December he returned back to Nepal to do his own practices. In 2006 he was appointed as Head Master of Kopan monastery and served for 4 years. He served at as acting Abbot for a year in 2011 when the late Guru Khensur Rinpoche Lama Lhundup became ill.
​​
He has been teaching at Kopan during meditation courses as well as traveling and teaching around the world, in US, Canada, many parts of Europe, Asia, Mexico, Guatamala and Australia
﻿​​​
Registration
Your generous donations are essential for the continuation of programs like this. No one turned away due to lack of funds. Please contact us to make arrangements.  Ordained Sangha (monks and nuns) are always welcome.