Don Handrick
Wednesday, Sept 18: 7pm-9pm
Frequently fear can lead to anxiety, anger, and even paralysis, thus making us unable to react constructively to the sources of that fear. However, with a more joyful attitude we can confront and overcome fear, and find an inner peace that will allow us to navigate the rocky terrain of our modern world more skillfully. In this session we'll investigate the methods to cultivate and deepen true joy so that we can utilize it as a resource in our daily lives to triumph over fear. 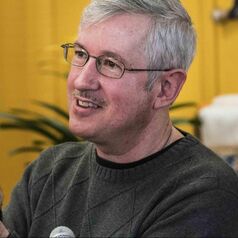 For six months each year, Don Handrick serves as the resident teacher at Thubten Norbu Ling, in Santa Fe, NM, a center affiliated with the Foundation for the Preservation of the Mahayana Tradition (FPMT). During that time, he also teaches at Ksitigarbha Tibetan Buddhist Center in Taos, NM, and volunteers for the Liberation Prison Project, teaching Buddhism once a month at a local prison. Since 2012 he has been an active member of the Interfaith Leadership Alliance of Santa Fe.

Don has received teachings from many esteemed lamas in the Tibetan Buddhist tradition including His Holiness the Dalai Lama, Lama Zopa Rinpoche, Ribur Rinpoche, Choden Rinpoche, and Khensur Jampa Tegchok.

Registration
Your generous donations are essential for the continuation of programs like this. No one turned away due to lack of funds. Please contact us to make arrangements. ​​​​