Taste of Buddhism: One Big Love

Tse Chen Ling is truly honored to have Tenzin Ösel Hita teach at our ongoing series Taste of Buddhism.

In response to a growing interest in Buddhism's traditions of self-reflection and meditation by people of all walks of life, Tse Chen Ling has developed a unique new program called “A Taste of Buddhism.” Taste of Buddhism (TOB) is a regular consistent Sunday morning program which provides an introduction, by a variety of instructors, to a particular aspect of Buddhism on an experiential level. The goal of these talks is to share the practical experience of the Dharma with people who are simply curious about Buddhism, new to Buddhist study, but it is also applicable to practicing Buddhists who want to be re-inspired in a friendly atmosphere and “plug-in” to the teachings.

In each Sunday TOB class time is given for a talk followed by a brief period of guided or silent meditation. This followed by a short tea/snack break. The last component of a TOB class will be a discussion and opportunity for Q & A. 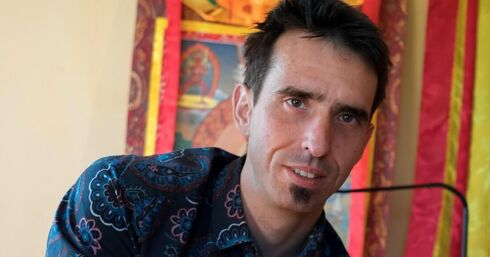 Tenzin Ösel Hita is a radical free-thinker, former monk, filmmaker, and musician who is highly gifted at sharing the essence of the Dharma and how it can be infused in modern daily life.

Tenzin Ösel was born in 1985, in the village of Bubión at the foot of the Sierra Nevada, southeast of Granada, Spain. When he was 14 months old he was recognized by His Holiness the Dalai Lama as the reincarnation of Lama Thubten Yeshe, the founder of the Foundation for the Preservation of the Mahayana Tradition (FPMT). He is one of only a handful of non-Tibetans formally recognized as the reincarnation of a Tibetan master.

He was educated in the traditional Tibetan Buddhist monastic university system at Sera Monastery in South India, where he lived and studied until he was 18. He also received a Western education and since leaving the monastery has lived, studied, and explored cultures and ways of life all over the world.
​
“I’m on the path of trying my best to be a Buddhist, with the philosophy of Dharma in my heart,” Ösel says. “I am going to be learning all my life. I’m sharing my experiences so we can grow together, as we are all interdependent, and living within a collective omniverse sharing so many things: air, space, resources, information, technology, energy. We are all students on this planet, always learning together. Deep within each of us, no matter where we’ve come from or what life experiences we’ve had, is an inexhaustible source of wisdom and compassion.”
Registration
Your generous donations are essential for the continuation of programs like this. No one turned away due to lack of funds. Please contact us to make arrangements. ​​​