It’s easy to think that being kind and compassionate means that we have to be available to everyone, 24/7, and do whatever it is they ask of us. We feel guilty about saying “no” or valuing our own needs. As a result, instead of feeling open and compassionate, we end up feeling resentful, stressed, and burned out. Is this really the meaning of compassion? How can we set boundaries compassionately so that we can hold ourselves with care while helping others? This workshop will explore and answer these questions.

Note: No prior knowledge or experience with Buddhism is required to participate. All are welcome.

​There will be a one hour lunch break. There are some dining options within walking distance of Tse Chen Ling but participants can bring food to eat as well.

About Ven. Tenzin Chogkyi
Venerable Tenzin Chogkyi is a Buddhist nun, activist and popular Buddhist retreat leader and teacher. Venerable Tenzin first became interested in meditation after reading "Be Here Now" and "Autobiography of a Yogi" in the early 1970s. She describes her spiritual path over the next 20 years as “meandering and haphazard” until she bought a one-way ticket to India in early 1991 with the intention of meeting His Holiness the Dalai Lama. In the end, she became a student not only of His Holiness, but also of Kirti Tsenshab Rinpoche and Lama Zopa Rinpoche during the year she spent studying at Tushita Meditation Centre in Dharamsala, India and Kopan Monastery in Kathmandu, Nepal.
After returning to the US, Venerable Tenzin worked at various positions within Lama Zopa Rinpoche’s organization, the Foundation for the Preservation of the Mahayana Tradition (FPMT). She was director of Vajrapani Institute, co-director the FPMT International Office, and coordinator of FPMT Center Services. She also completed several long meditation retreats over a six-year period.
Venerable Tenzin took preliminary ordination vows with Lama Zopa Rinpoche in 2003 and novice ordination in 2004 with His Holiness the Dalai Lama. Since 2006 she has been teaching at various FPMT centers around the world.

Venerable Tenzin is teaches at both the foundational and in-depth level as well as leading long retreats. She is also a teacher of the a.r.t. of Fulfillment, one of the secular programs of the Foundation for Developing Compassion and Wisdom, and in October 2017 will be beginning the teacher training for Compassion Cultivation Training, a program developed by Geshe Thubten Jinpa and colleagues at Stanford University. In addition, she is certified teacher of Cultivating Emotional Balance, a secular program in dealing with emotions developed by Alan Wallace and Paul Ekman at His Holiness the Dalai Lama’s request. She resides at Land of Medicine Buddha in Soquel. 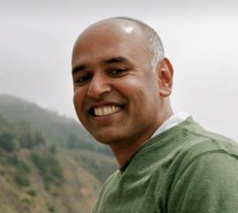 ​About Sunil Joseph
"I have been a student of Nonviolent Communication (NVC) since 2004. In 2008, I attended BayNVC's yearlong Leadership Program to both deepen my personal NVC embodiment and also to learn to share NVC with others. Ten years later, I continue to be amazed by the power and simplicity of this approach to meet life in a compassionate way. While I am not a certified NVC trainer, I am happy when my personal practice benefits others. I consider myself a lifelong NVC learner and explorer."
Registration
​Your generous donations are essential for the continuation of programs like this. No one turned away due to lack of funds. Please contact us to make arrangements.