Riding the Wave in Turbulent Times 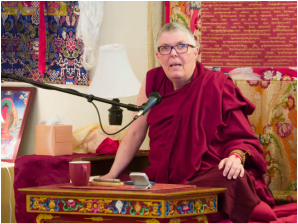 Venerable Jampa Sangmo is a Tibetan Buddhist Nun. She was born in Hermosa Beach, California.  In 1966 she was first introduced to meditation at the University of California at Los Angeles.  Her practice began with Vipassana Meditation where she did numerous long retreats. She came to Tibetan Buddhism in 1993 and began her studies with several Buddhist Masters including Lama Zopa Rinpoche, H.E. Choden Rinpoche, Ribur Rinpoche, Thich Nhat Hanh, and His Holiness the Dalai Lama. She took robes with her teacher Khensur Jampa Tegchok Rinpoche in 2008. She has lectured and led meditation groups and retreats for Chevron International, Facebook Menlo Park Campus, Road Scholar (formally Elder Hostel), Spirit Rock Meditation Center, Ocean of Compassion, Land of Medicine Buddha (LMB), and Vajrapani Institute. She facilitated a Cancer Support Group for four years at LMB.

Jampa Sangmo’s teaching emphasizes the application of meditation to one’s personal, and work life, in order to enrich one's happiness and effectiveness. Before becoming a Nun she worked as an analyst and consultant in government and the private sector. She developed several programs that increased organizational efficiency and provided innovative solutions to problems in the workplace.

Venerable Jampa Sangmo currently resides in San Francisco and teaches meditation.
Suggested donation: $45 – $90
Your generous donations are essential for the continuation of programs like this.
No one turned away due to lack of funds — please contact us to make arrangements.