About Ven. Lozang Yönten:
Ven. Lozang Yönten is an American-born Tibetan Buddhist nun in the Gelug Tibetan tradition who was ordained in 2003. Her (merely labeled) pronouns are she/her and she is a fully ordained Bhikshuni/Gelongma in the Dharmaguptaka tradition.

Buddhist since her teenage years, Ven. Yönten moved to Chenrezig Institute in QLD, Australia when she was 19 and studied intensively under Khensur Rinpoche Geshe Tashi Tsering (Lharampa Geshe from Sera Je Monastery and former Abbot of Gyü-me Tantric College) for seven years, completing their Buddhist Studies Program (including FPMT’s Basic Program as well as other advanced topics) and retreats.

She then continued to study, retreat and offer service at Dharma Centers in India and Taiwan as well as Australia and New Zealand, becoming an In-Depth Registered Teacher within the Foundation for the Preservation of the Mahayana Tradition (FPMT)in 2012.

Ven. Yönten was then the Resident Teacher of Kunsang Yeshe Retreat Centre in the Blue Mountains of NSW, Australia from 2012 – 2015 and then at Mahamudra Centre for Universal Unity in New Zealand until 2018. She continues to offer classes and retreats at both Centres annually (unless there is a global pandemic). 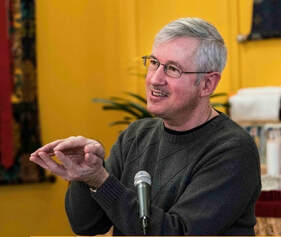 About Don Handrick:
Don Handrick is a touring teacher for the FPMT, sharing the Dharma with centers and study groups in North America and other parts of the world, both in-person and online. From 2006 through 2020, he served as the resident teacher at Thubten Norbu Ling, in Santa Fe, NM. During that time, he also taught regularly at Ksitigarbha Tibetan Buddhist Center in Taos, NM, and volunteered for the Liberation Prison Project, teaching Buddhism once a month at a prison in nearby Santa Rosa. Beginning in 2016, Don became a touring teacher for half of each year, visiting and teaching at other centers around the world. Since 2012 he has been an active member of the Interfaith Leadership Alliance of Santa Fe.

Don has received teachings from many esteemed lamas in the Tibetan Buddhist tradition including His Holiness the Dalai Lama, Lama Zopa Rinpoche, Ribur Rinpoche, Choden Rinpoche, and Khensur Jampa Tegchok. In 1998 he attended the FPMT's Masters Program of Buddhist Studies in Sutra and Tantra, a seven-year residential study program conducted at Lama Tzong Khapa Institute in Tuscany, Italy. He successfully completed all five subjects of this program in 2004, receiving an FPMT final certificate with high honors.  In 2015, he had the honor of being selected to lead the renowned November Course, a one month teaching and meditation retreat held annually at Kopan Monastery in Kathmandu, Nepal.
This program is being offered jointly by:
Registration:
Advanced registration for this program is required. Once you register, you’ll receive the Zoom link to join the class.

Ordained sangha are always welcome free of charge. ​And no one is ever turned away for lack of funds.  Please contact us at office@tsechenling.org to inquire.
​
register here